Patricia Markert was born and grew up in Syracuse, New York. She was educated in Catholic schools her whole life until she left Georgetown University in her sophomore year, and transfer 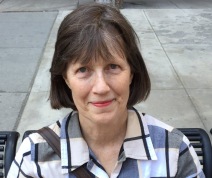 red to the University of Iowa, where she studied English, continued her French major, and took writing classes with Denis Johnson, Marvin Bell, and other poets. She moved to New York City where she worked in publishing for over ten years, mostly at McGraw Hill. She began her library career with a “lone ranger” position at the Town School, teaching pre-K through eighth grade classes, managing all A-V requests, and processing catalog records. She moved to Little Red School House as a high school librarian, and finally joined the Brearley School, first as an A-V librarian, moving into the head librarian position, and most recently teaching classes in all three divisions. She writes poetry, appreciates birds, and works in a community garden in her neighborhood. 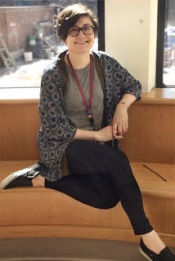 Murphy is the Upper School Librarian at The Berkeley Carroll School where she also teaches the 8th grade digital literacy course. She received her MLIS with New York State Teaching Certification from Pratt in 2016. She holds an MA in Cinema Studies from NYU and a BA in Women’s Studies and Psychology from Georgetown. She loves to read about the intersection of humanity and technology, as well as memoirs and graphic novels of all kinds.

Cheryl Wolf is the librarian for The Neighborhood School (PS 363) and Star Academy (PS 63), two co-located elementary schools in the East Village. She earned her M.L.I.S. from Pratt Institute. Prior to joining the field of librarianship, she was a curatorial assistant at the Whitney Museum of

Art. She studied painting (Bard College (B.A.); Art History (Hunter College, M.A.) and Curatorial Studies at The Whitney Museum Independent Study Program. Her work as a parent volunteer at the Collegiate School library, under the tutelage of Maggie Dixon, was her introduction to the field of school librarianship. In 2009-10 she was Co-President of the New York City School Librarian Association (NYSCLA). She is partial to picture books, and maintains the premiere collection of children’s cookbooks and food-related books in New York City, through the Cooperative Collection Development (CCD) program. Cheryl lives with her husband on the LES and has two grown sons. As a public school librarian, she is looking forward to help bridging the NYCSLA and HVLA communities. Cheryl enjoys looking at art and making textiles (weaving, knitting, sewing).

Looking for more information on HVLA’s OverDrive/Sora Consortium? Be sure to check out the Consortium website.